Via The New York Times

Melvin Van Peebles is a pioneer in black cinema, having directed, written, produced, scored and starred in what many people consider the first blaxploitation film, Sweet Sweetback’s Baadasss Song. The New York Times recently published a fantastic profile of Peebles’s attempt to turn Sweetback into a stage musical that’s essential reading, if only for passages like this:

In person Mr. Van Peebles is a throwback to the era of Afros and revolutionary rhetoric. His beard has gone ash white, but he still sports black leather vests and pants, purple-shaded glasses and vintage high-tops. He is rarely without a soggy cigar — occasionally lighted — or a bellicose zinger, like: “If somebody messes with me, it’s not a lecture they need. It’s a brick.”

Hip-hop fans may be more familiar with Peebles from Madlib’s prominent sampling of his music on his two Quasimoto albums; allegedly ‘Lib and Peebles were supposed to do a double album together back in ‘05, I wonder what happened to it? 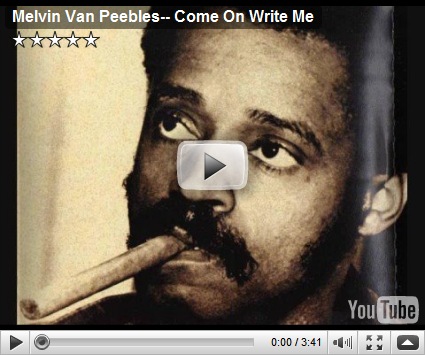