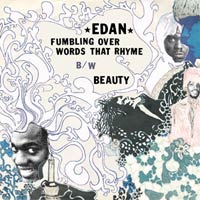 Making up for skipping it last week: it’s another Tuesday so naturally ML hits you, the reader, off with some heat on the remix tip.

Edan is a dope emcee, DJ & producer from Boston, Mass who mixes late 80s-early 90s hip hop with a variety of different musical styles. On his most recent album, 2005′s Beauty And The Beat, he fuses golden age hip hop with 60s psychedelia to accomplish his goal of putting “Syd Barrett’s face on Biz Markie’s body” with “Kool G Rap’s brain”. It’s wildly creative and really consistently great all the way through.

The standout song for me and the one I’m specifically writing about today is “Fumbling Over Words That Rhyme”. Edan uses the song to educate the listener about the true pioneers in hip hop and urges them to “Pump your fist, but first give praise to the true scientists”.

The OG version, produced by Edan himself, rocked a dusty drum break, Mellotron sounding synths, and a vocoder singing the song’s title as a hook.

The remix I’m covering today was never actually pressed to vinyl, unfortunately. It was done by currently unsigned Toronto producer Beat Chemist and was originally put up on his now defunct website. It replaces the spacey synths and vocoder and switches out Edan’s drums for a more frantic break, accompanied by pumping horns. Chemist adds some scratches of Das EFX (“REAL HIP HOP!”) and of all the rappers Edan mentions throughout the track.

Both versions are dope but Chemist really brought out some uncut raw dopeness in the song. As mentioned, though BC’s official site is down, he has some great beats and instrumentals at his MySpace and his New Music Canada page that you should check out.

Listen to “Fumbling Over Words That Rhyme” here.

Listen to the Beat Chemist remix of “Fumbling Over Words That Rhyme” here.

Buy Beauty And The Beat while you’re at it.