Day 1 of Bonnaroo 2015 for ML started off with working our way through the heat to hip hop blog sensation Dej Loaf. We’re looking forward to what she’ll have to show us in the next year or so but in her debut Bonnaroo appearance it was clear that the crowd was more into her DJ dropping ‘Trap Queen’ and ‘Tuesday’ in the middle of her set than any of her material. We caught newcomer Raury at The Who Stage (which replaced the Sonic stage) who clearly understands the importance of throwing a good party. He played to his strengths when acknowledging the crowd’s demographic of recent college graduates in his closing freestyle, referencing college debt and financial insecurity garnering a noticeable response from the audience. Our bets are on Raury for blowing up on your neighborhood internet channels sometime this year. Next up was Glass Animals who were somewhat of a disappointment but to no fault of their own. A big challenge for artists performing at Bonnaroo is being able to fill the space given with their sound. We’ve noticed this in the past, particularly with bands that have softer vocals such as Purity Ring (2013) and Washed Out (2014). Glass Animals is no different as their sound relies pretty heavily on their lead singer’s whisper-vocals. That being said, the band sounded on point… we just wish we could have heard more of the actual songs.

Best of the day: Jungle. The UK’s most mysterious act blew us the fuck away. The fact that they had us dancing post-midnight with the absolute last ounces of our energy (after sleeping for only 3 hours and traveling for an entire day) is a testament to how much they brought to the stage. We caught them at DC’s Black Cat which was also fantastic but this performance was taken up a few notches. It’s going to be really really hard for any act to top them this weekend.

Last year we told you about the best jerseys we saw but this year we’re moving from apparel to bring you the best totems that we’ve seen. What’s a totem you ask? It’s the thing that the asshole in front of you is holding that ends up blocking your view of the stage. All shade aside, last year we saw some pretty inventive stuff, including a guy who turned himself into a Sim. Check back on Day 4 for our top of the top totems.

Lastly, it wouldn’t be Bonnaroo if we didn’t combo brag-complain about how many steps we’ve been getting. Dj01 will be posting his loyal Fitbit steps but, sadly, my Fitbit met it’s demise a few months ago and I made the switch to the Misfit Shine. This just turned into a step tracker comparison post… you can probably already tell that Dj01′s steps are more accurate than mine. 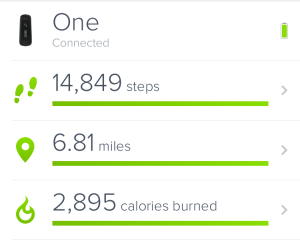 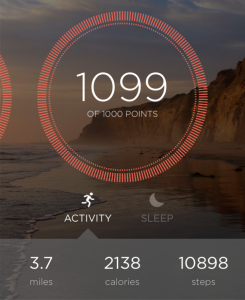